A Lakota woman fights to build a strong nation 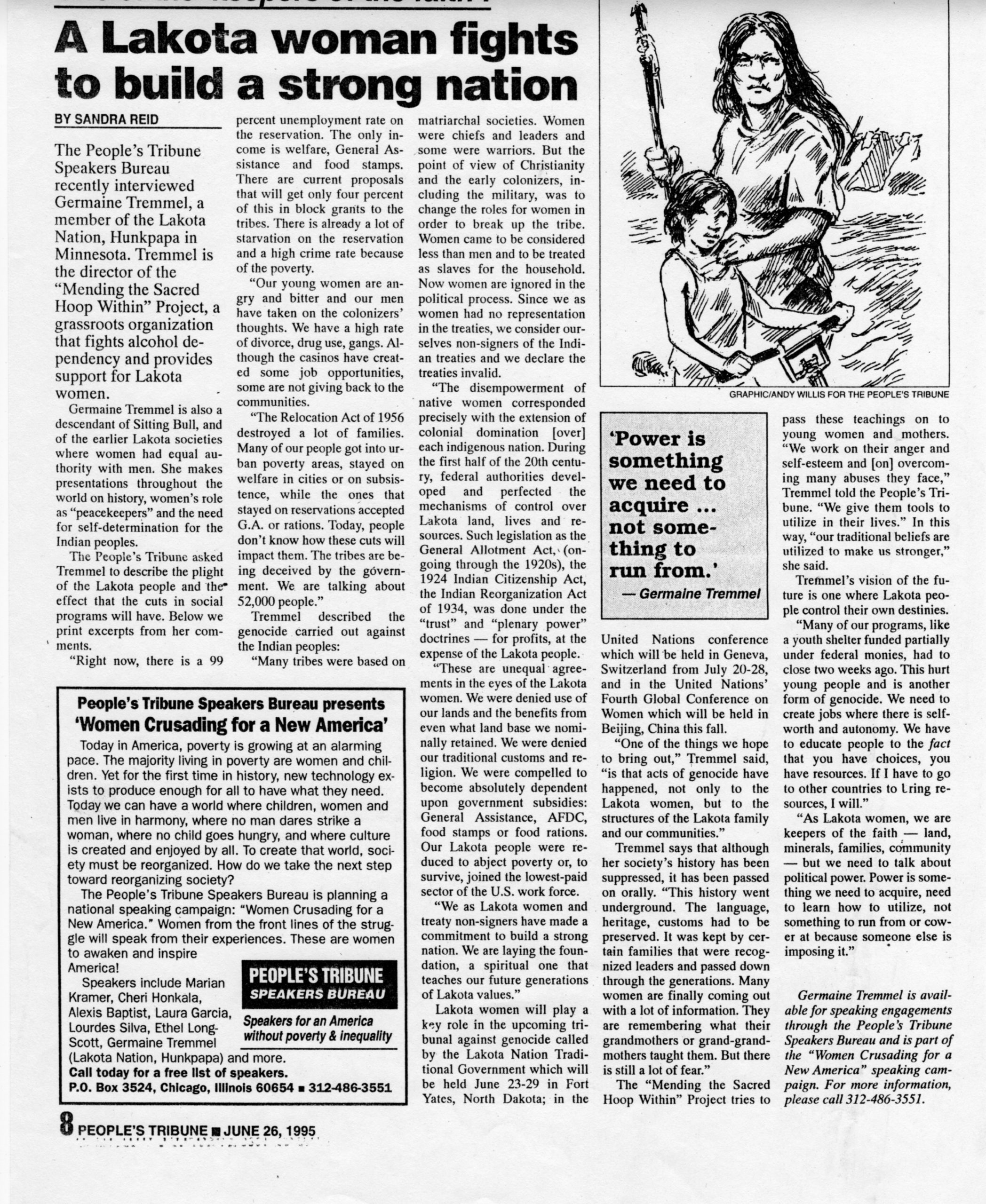 “The People’s Tribune asked Tremmel to describe the plight of the Lakota people and the effect that the cuts in social programs will have. Below we print excerpts from her comments.

“Right now, there is a 99 percent unemployment rate on the reservation. The only income is welfare, General Assistance and food stamps. There are current proposals that will get only four percent of this in block grants to the tribes. There is already a lot of starvation on the reservation and a high crime rate because of the poverty.

“Our young women are angry and bitter and our men have taken on the colonizers’ thoughts. We have a high rate of divorce, drug use, gangs. Although the casinos have created some job opportunities, some are not giving back to the communities.

“The Relocation Act of 1956 destroyed a lot of families. Many of our people got into urban poverty areas, stayed on welfare in cities or on subsistence , while the ones that stayed on reservations accepted G.A. or rations. Today, people don’t know how these cuts will impact them. The tribes are being deceived by the government. We are talking about 52,000 people.” (webmasters’ note: THIS was written in 1995 and the truth of these words and the numbers have increased substantially!)

Tremmel described the Genocide carried out against the Indian peoples:

“Many tribes were based on matriarchal societies. Women were chiefs and leaders and some were warriors. But the point of view of Christianity and the early colonizers, including the military, was to change the roles for women in order to break up the tribe. Women came to be considered less than men and to be treated as slaves for the household. Now women are ignored in the political process. Since we as women had no representation in the treaties, we consider ourselves non-signers f the Indian treaties and we declare the treaties invalid.

“The disempowerment of native women corresponded precisely with the extension of colonial domination over each indigenous nation. During the first half of the 20th century, federal authorities developed and perfected the mechanisms of control over Lakota land, lives and resources. Such legislation as the General Allotment Act, (ongoing through the 1920s), the 1924 Indian Citizenship Act, the Indian reorganization Act of 1934, was done under the “trust” and “Plenary power” doctrines – for profits, at the expense of the Lakota people.

“These are unequal agreements in the eyes of the Lakota women. We were denied use of our lands and the benefits from even what land base we nominally retained. We were denied our traditional customs and religion. We were compelled to become absolutely dependent upon government subsidies: General Assistance, AFDC, food stamps or food rations. Our Lakota people were reduced to abject poverty or, to survive, joined the lowest paid sector of the U.S. work force.

“We as Lakota women and treaty non-signers have made a commitment to build a strong nation. We are laying the foundation, a spiritual one, that teaches our future generations of Lakota values.”

“One of the things we hope to bring out,” Tremmel said, “is that acts of Genocide have happened, not only to the Lakota women, but to the structures of the Lakota family and our communities.”

Tremmel says that although here society’s history has been suppressed, it has been passed on orally. “This history went underground. The language, heritage, customs had to be preserved. It was kept by certain families that were recognized leaders and passed down through the generations. Many women are finally coming out with a lot of information. They are remembering what their grandmothers or grand-grandmothers taught them. But there is still a lot of fear.”

The “Mending the Sacred Hoop Within” Project tries to pass these teachings on to young women and mothers. “We work on their anger and self-esteem and on overcoming the many abuses they face,” Tremmel told the People’s Tribune. “We give them tools to utilize in their lives.” In this way, “our traditional beliefs are utilized to make us strong,” she said.

Tremmel’s vision of the future is one where Lakota people control their own destinies.

“Many of our programs, like a youth shelter funded partially under federal monies, had to close two weeks ago. This hurt young people and is another form of Genocide. We need to create jobs where there is self worth and autonomy. We have to educate people to the fact that you have choices, your have resources.

“As Lakota women, we are keepers of the faith – land, minerals, families, community – but we need to talk about political power. Power is something we need to acquire, need to learn how to utilize, not something to run from or cower at because someone else is imposing it.”