National General Council, the Governing Body of all the Lakota, Dakota, Nakota Nation, which are located on our territories, The Louisiana Purchase area into Canada, the Allodial title to 283 tracts of land covering more than one hundred ninety millions of acres in the imposed counties and states of Wisconsin, Minnesota, Iowa, Missouri, North Dakota, South Dakota, Nebraska, Kansas, Montana, Wyoming, Colorado and parts of Canada for education purposes for our future Generations. The ownership of the Allodial Title of the Great L,D,N Nation since time Immemorial, which means before Moses. The law givers time, before the Old and New Testament, and the Bible. Before Christopher Columbus, and before forming the Imposed Canadian and USA Governments.

Allodial Title is immutable, which can not be extinguished by the Imposed Feudal Systems of the USA and Canadian Governments, or wars or war crimes. Such as genocide or apartheid or invented wealth of course paper wealth or imposed value systems. However, Imposed States, counties, Provinces, and quit claim deeds can be extinguished with the imposed Neo Colonialism, Neomercantillsm, and Neo Colonization by Imposed Christian Religions and Cloning. With this Imposed “Pirates Magna Carta” which is all illegal and Imposed Pirates concepts of the Electro Monarch System, which is all Genocidal concepts on our L.D.N Nation. The imposed Electro Monarch System Governing body has turned our people in to pirates, as liars and thieves and bribery taking pi ace with Imposed city, county, state and provinces, federal USA and Canadian Governments, undermining our allodial title to our land, water, air, and resources and jurisdiction. Total violations of International Treaties and human rights violations, by forcing under duress, the L.D.N nations peoples on reservations — concentration camps, where corporate apartheid has been taking place since being forced there. 95 percent corporate unemployment since being forced there. 75 percent homeless since being forced there. 70 percent of the people are sick, since being forced there. As rampant unchecked starvation, alcohol, drug, deaths, rampant medical experiments by the imposed USA and Canadian Governments drug and medical experiment stations noted as CDC, Center for Disease Control, in turn these corporate pharmaceutical companies are making billions of dollars on our peoples, not to mention the alcohol distilleries, wineries, breweries, Billions while our people are dying. Rampant news media black out-radio-T.V,-newspaper, corporate isolation, corporate embargoes, corporate sanctions, imposed since being forced there.

The Constitution of both imposed USA and Canadian Governments has failed our nation, and their Parliament Congress and Senate all have failed to protect our nation’s people’s rights. The imposed Indian Reorganization Act of 1934, the imposed Governing bodies of these concentration camps have failed our peoples rights and no representation. The Bureau of Indian Affairs since 1824 act has failed our people to the max. No accountability and no representation, same as domestic corporate lawyers all failed our nation. As the L.D.N nations children are being abducted by the imposed state and federal Social Services like taking puppies away from the mother dog. Where is our representation? Our L.D.N. Veteran’s do not have any kind of representation from the imposed V.A. or Department of War. Remember these are all International Treaty Human Rights-International child abduction taking place here. All of these causes has forced our nation to re-activate our traditional national government. We have to mention the imposed corporate education has failed our nation here, as our people were programmed by the B.I. A and Christian boarding schools-residential schools, the corporate occupational schools called colleges and universities, all brainwashing our peoples which is genocide, forced assimilation in reality all the imposed USA and Canadian Military Governments have on our territories is a police force imposed to enforce their illegal law policies and acts, and a military to protect their illegal corporate plundering, exploitation, fraud, and greed, nothing else. They tried to use International Imposed invented laws to justify all of their illegal killing and plundering of our peoples and all our nations’ property with the Louisiana Purchase of 1803, Doctrines of Discovery, conquering, they lost all of that when their standing army was wiped out off of the face of the earth on June 25 1876. by L.D.N. nations and other nations allies at the Battle of the Little Big Horn, on sacred ground. Their intention of mass murder of L.D.N. nations peoples and other tribes nations was disrupted permanently under International Law and sacred natural laws, when nations of peoples fight for their survival and soil and win all of their allodial title land, air, water, and resources is theirs. The USA corporate military government completely lost it all. Reminder our gold and illegal taxes helped financed the Magna Carta, Veterans Administration, even Social Security, all welfare benefits, they should have learned their lesson but no they had the mind set which they inherited as undesirables of “Africa” and Egypt. As albinos that’s where they inherited the cloned true white gray skin as the Jews were black skinned Jews, as they did not split the Red Sea. The Egyptians helped them cross the Red Sea out in to the desert to get rid of them. They come here as the mind set of paupers and beggars as greedy homeless beggars. They come here on our soil and found the milk and honey and the only way to get this was at the end of gun barrels and illegal military occupation, the largest Magna Carta, Corporate USA Military Government armed robbery in the world history took place on L.D.N. nations soil “Hard Won Soil”, the imposed Homestake Mining Company did this with the USA Military guarding and protecting their steal at Belle Fourche, South Dakota. L.D.N. nations gold one and only one of it’s kind in the world. With our money they fought the 1st and 2n world wars, with our money they helped rebuild all the liberated countries with the Marshall plan in Europe. They called it European Recovery Program with L.D.N. nation’s money; they set up the Nuremberg Tribunals at Nuremberg Germany after the Jewish Holocaust with the L.D.N. nations money they financed the United Nations in 1945, with L.D.N. nations money they financed and Imposed the state of Israel in 1948. L.D.N. Nation and helped financed the International Court of Justice. Also the L.D.N. Nation helped finance the nuclear weapons the USA Military has now with L.D.N Nations money they financed Wall Street and made 7,000,000 millionaires, 800 billionaires, 350 trillionaires with L.D.N. Nations gold and hundred and ninety millions of acres, resources land, air, water, and illegal tax money generated all of these years easily with compounded interest runs into the trillions of dollars owed to the L.D.N. Nations by both USA and Canadian Corporate Military Governments. L.D.N. Nations financed all the railroads and roads.

L.D.N Nations money we also helped finance the Imposed Federal reserve and all of the Banking and Lending Institutions, and financed all the farmers and ranchers, also financed the operations of both U.S.A. and Canadian Corporate Military Governments at the present time, also helped finance 191 Imposed Sates who are Members of states in the United Nations. Last of all these Immigrant White-Skinned Albinos through genetic engineering and cloning don’t even know where they originated from have been

undermining our Nations Peoples at the end of gun barrels, by hanging up signs saying No Dogs or Indians Allowed, calling them Dumb Dirty Dog Eaters. Well, if it weren’t for our languages as veterans everybody around the world would be speaking the languages of the Japanese, German or Italian.

Let this history of violence and treatment of our own L.D.N. Nations Peoples even with International Peace Policy Treaties which they violated all of them, let this be in remembrance of abuse of our Peoples, as we are not part of the “Magna Carta” Corporation or state

Let this be our Preamble and Constitution: Have Respect for all. Now let the remedies and rectification begin for land restoration and reparations.

National General Council for all Lakota, Dakota, Nakota Nation will be located here on our allodial soil the imposed city of Rapid City, the imposed County, Pennington, the imposed state of South Dakota. Also located here will be the L.D. N. Nations, International Embassy, we will have a Head of State, Ambassadors, Emissaries, Ministers, Consulates, and various diplomatic officials, International Consultants and advisors. All of our International affairs will be diversity of peoples from other countries with expertise, special knowledge and experience in fields of economics and other fields of expertise to upgrade our way of life, which will also benefit the U.S.A., Canada, and the world at large. 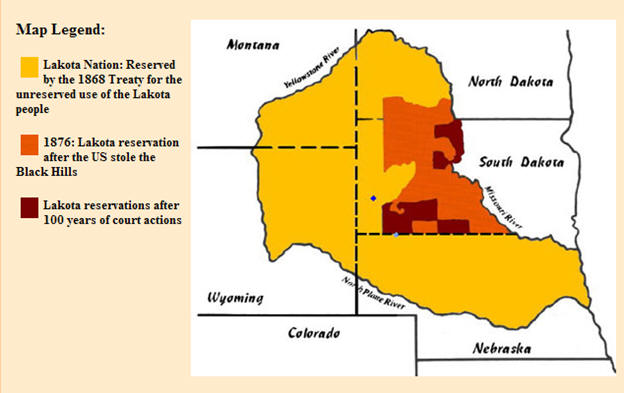