Chief Grass’ continued to work, speak, write to regain the sovereign rights of his people and all Indigenous Peoples around the globe.

“Indigenous peoples have the right to the lands, territories and resources which they have traditionally owned, occupied or otherwise used or acquired,” according to Article 26. Article 28 states that qualified groups “have the right to redress,” which can include “restitution” or “just, fair and equitable compensation” for land or resources that have been “confiscated, taken (or) occupied”… see entire document at http://social.un.org/index/IndigenousPeoples/DeclarationontheRightsofIndigenousPeoples.aspx

OUR LAND, WATER, RESOURCE RIGHTS BY United Nations’ STANDARDS – See Rights of Indigenous Peoples U.N. Document regarding Free, Prior and Informed Consent and our nations’ statement of full legal rights are covered within document “Reclaiming the Black Hills”

To read timeline of our nations’ history with the United States Government – click here…..

The following document is transcribed below copy for easy reading and to include it’s wording in web searches. 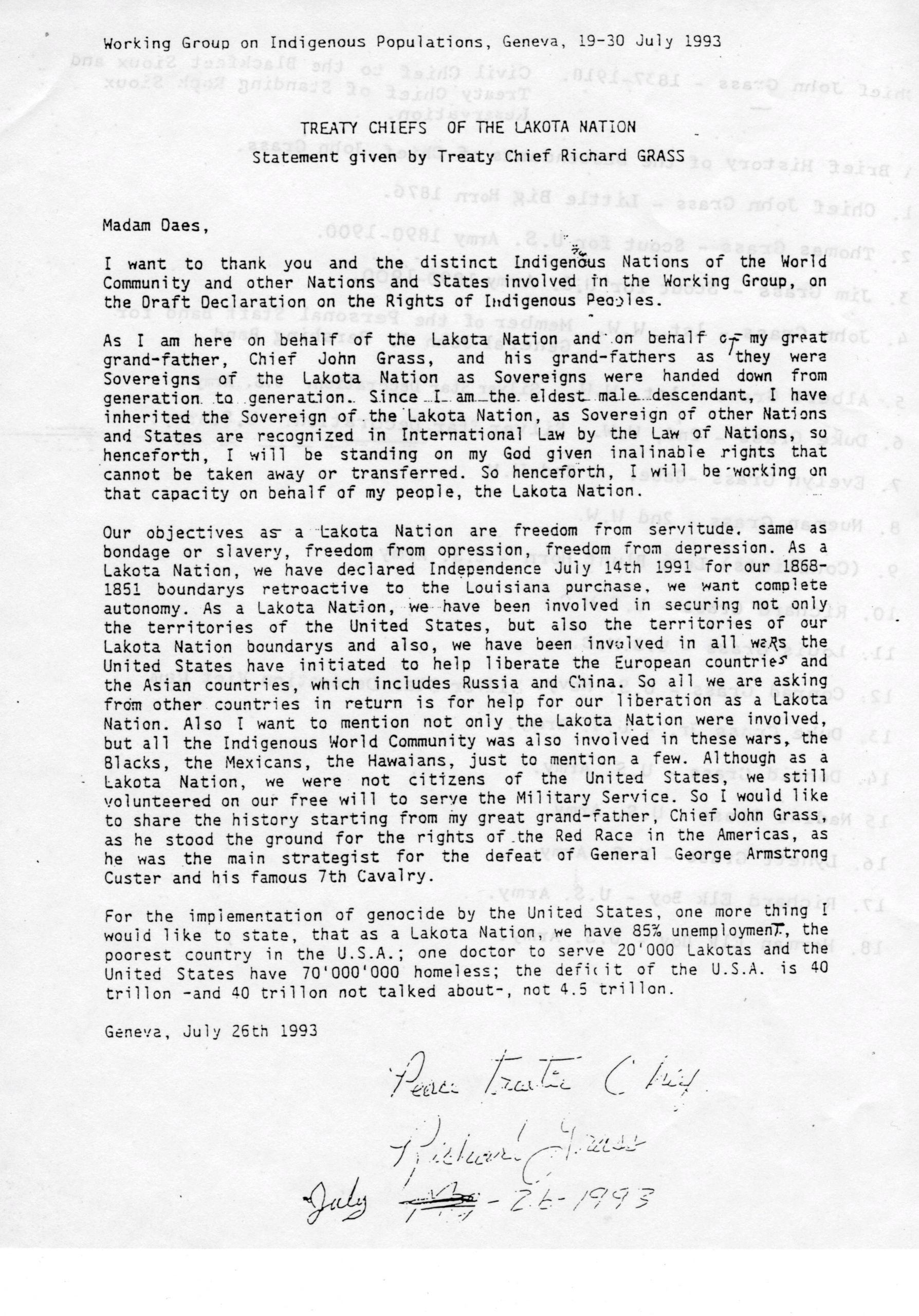 Note: Chief Grass signed the above U.N. statement “Peace Chief” – this was and is the work of traditional spiritual Chiefs and Elders of the L.D.N. Nation

For easier reading and to insert this information into web search, we transcribe the above, below:

I want to thank you and the distinct Indigenous Nations of the World Community and other Nations and States involved in the Working Group, on the Draft Declaration on the Rights of Indigenous Peoples.

Also, I want to mention not only the Lakota Nation were involved, but all the Indigenous World Community was also involved in these wars, the Blacks, the Mexicans, the Hawaiians, just to mention a few. Although as a Lakota Nation were were not citizens of the United States, we still volunteered on our free will to serve the Military Service. So I would like to share the history starting from my great great grandfather Chief John Grass, as he stood the ground for the rights of the Red Race in the Americas and was the main strategist for the defeat of General George Armstrong Custer and his famous 7th Cavalry.

For the implementation of genocide by the United States, one more thing I would like to state, that as a Lakota Nation, we have 85% unemployment, the poorest country in the U.S.A.; one doctor to serve 20,0000 Lakotas and the United States have 79,000,000 homeless; the deficit of the U.S.A. is 40 trillion and 40 trillion not talked about, not 4.5 trillion.