We are sad to report the passing of Chief Richard Grass on Thursday, December 23, 2010. He was preceded to the Spirit world by sister Mona Grass Brown 6 months earlier.
On the wings of the last big South Dakota snowstorm in 2010, funeral services were conducted at the Mother Butler Center in Rapid City , South Dakota, at 10:00 a.m. Thursday December 30. Burial followed at National Cemetery in Sturgis. There continues to be opportunity to share your remembrances, a song, and comfort to friends, family, tiospaye by sending an email to webmaster with your comments and memories of Chief Richard, which will be posted and updated on Memorial Page on this site.

His life work continues to make a difference to all Indigenous People all around the world.
In Memory of Richard Grass

Click below to listen to a 4-28-10 online interview with Chief Richard Deo Grass, descendant to Chief John Grass (Mato Watapke – Charging Bear – Oglala, Lakota, Sihasapa) wherein he explains how he was eventually located by the Elders and informed of his lineage and duties to re-establish this nation. 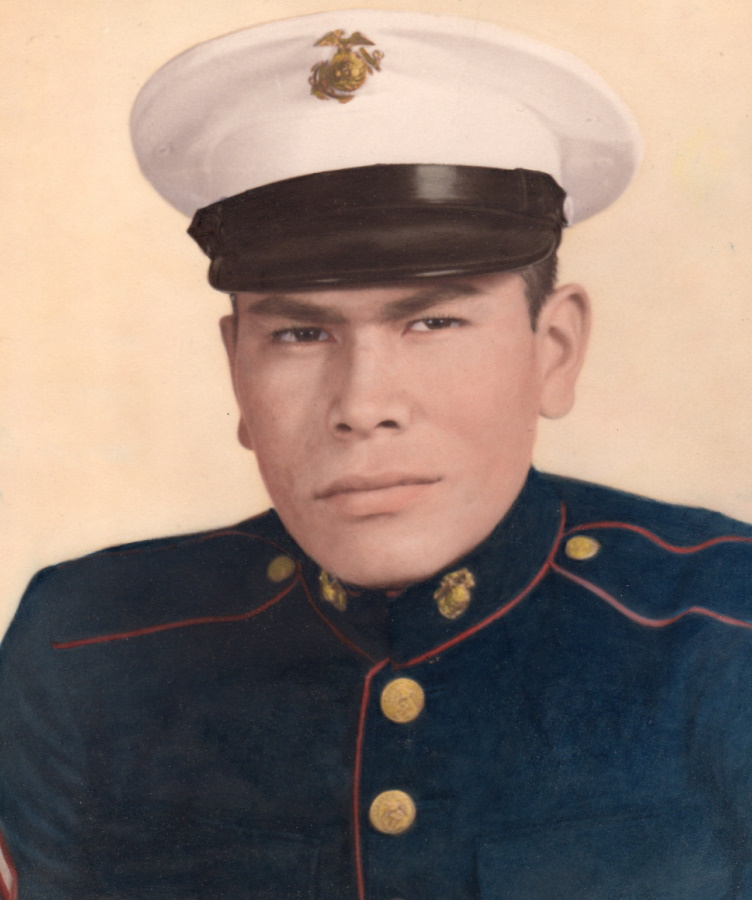 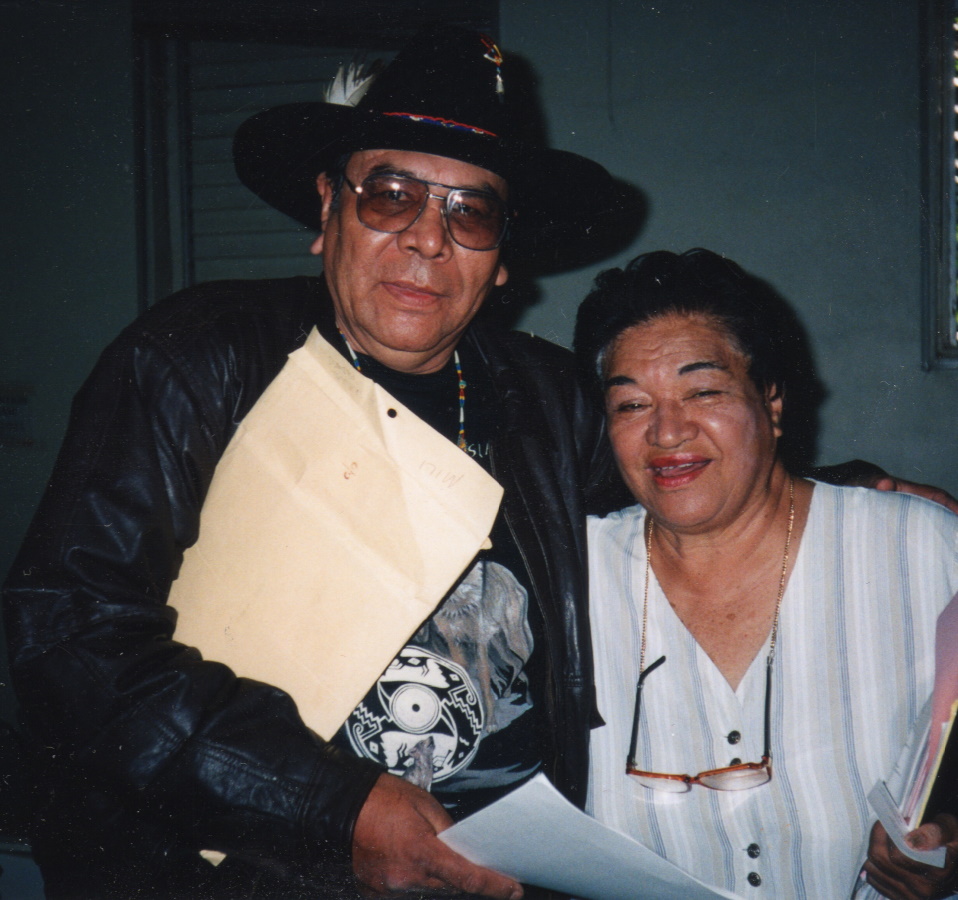 In Hawaii – Chief Richard Grass with woman Chief in 1998 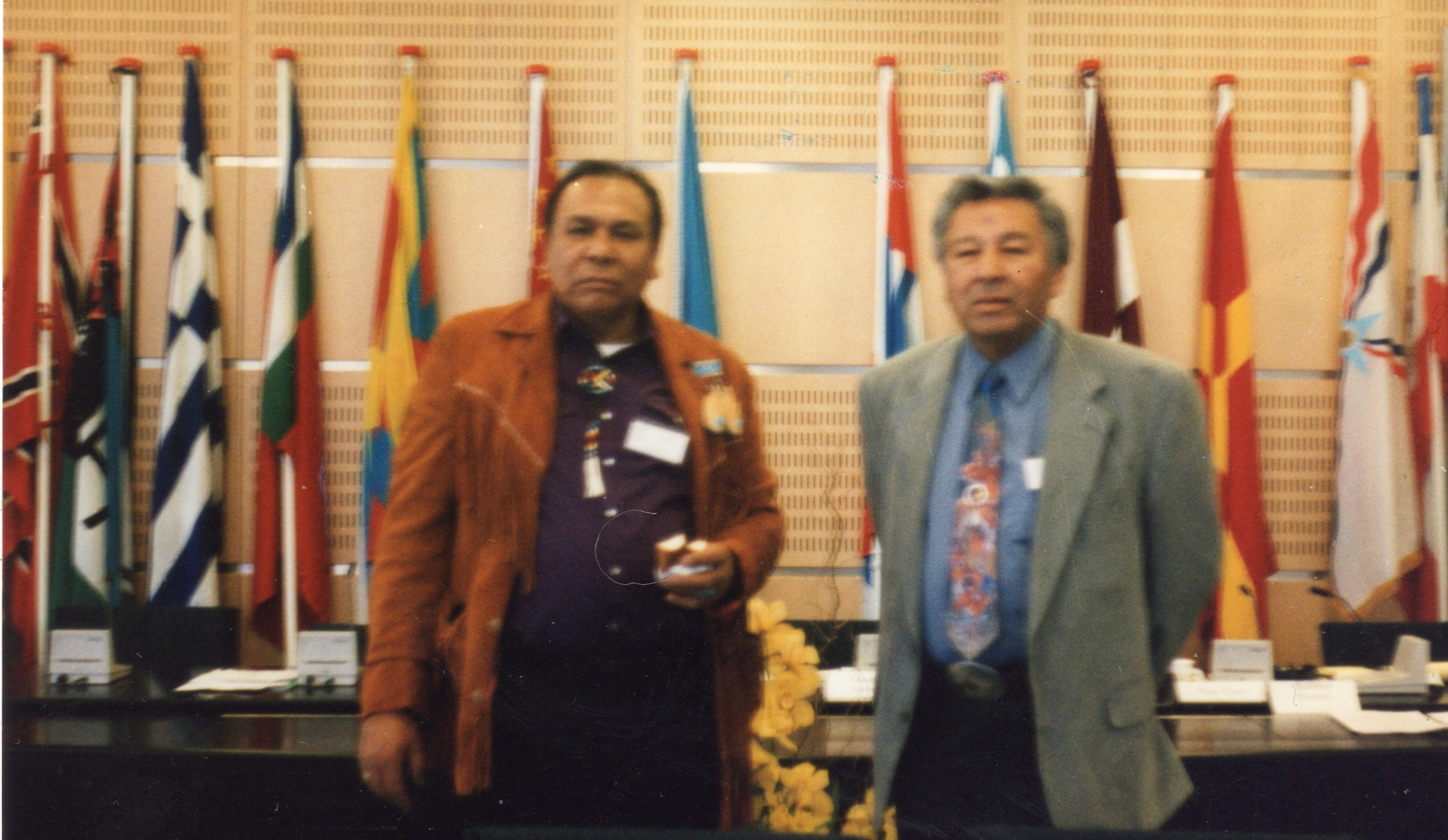 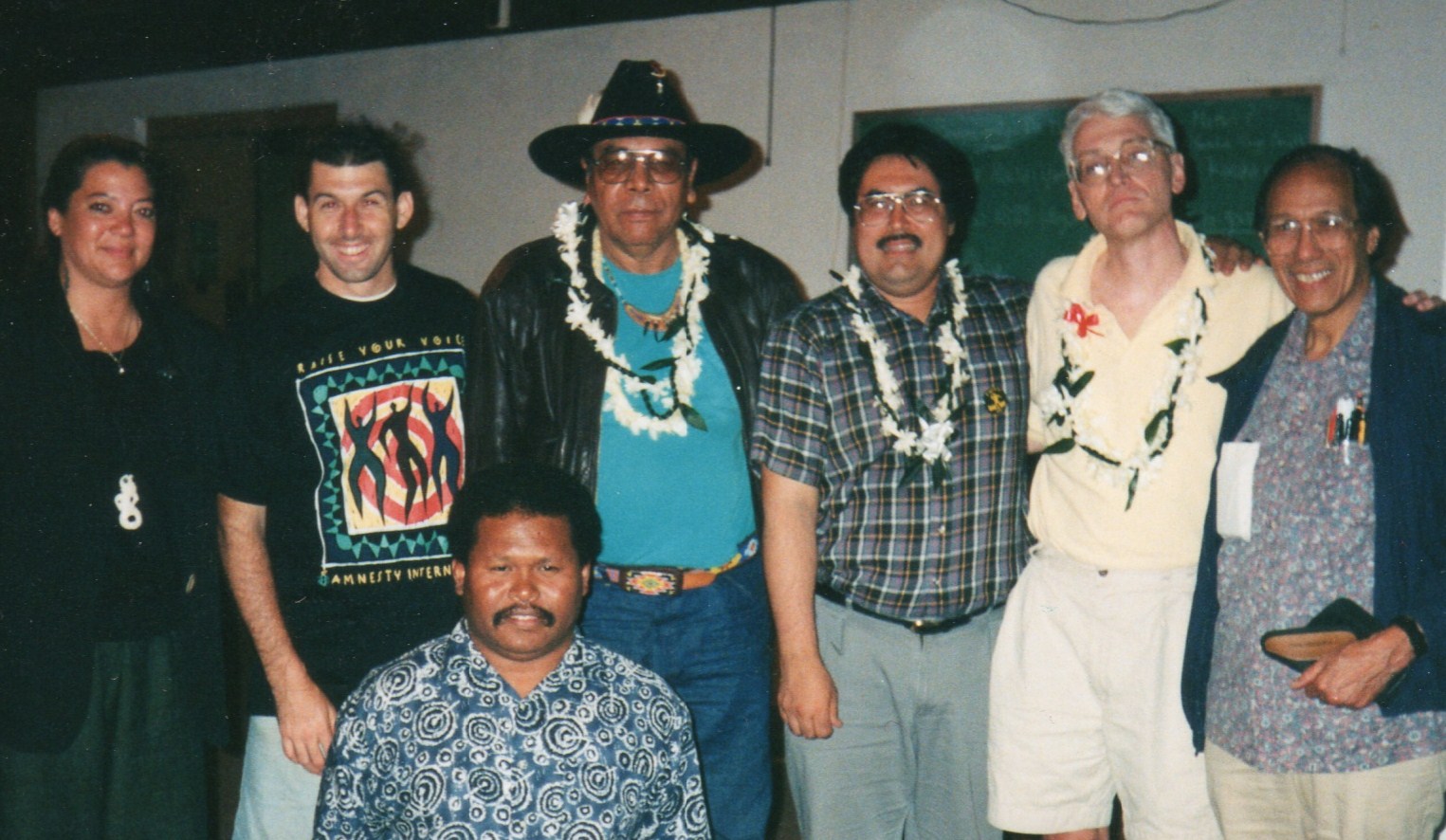 Chief Richard Grass in Hawaii with Hawaiian Chiefs. Ron Barens on right next to Francis A. Boyle, International Lawyer to L.D.N. Nations 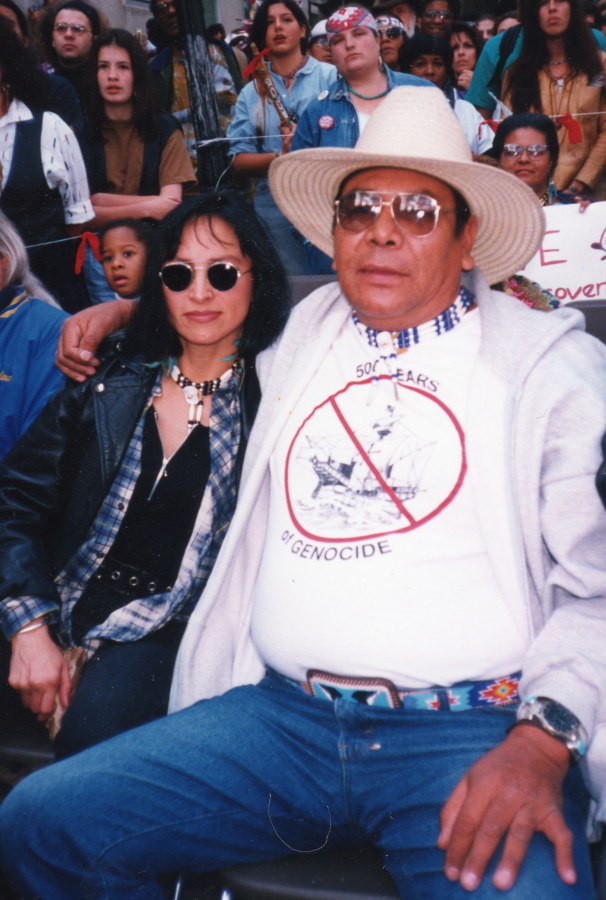 Chief Richard Grass in Manhatten, N.Y. about 1995 protesting at the United Nations with his niece Kayco Morimoto. (Richard’s choker, belt and belt buckle were made by the Grass family).

Two days prior to his passing Chief Richard Grass was planning to meet with Bunny Sings Wolf for an online interview scheduled for Wednesday, December 30, 4:00 p.m. Mountain time (which turned out to be the day and time a wake was beginning in his honor in Rapid City at the Mother Butler Center). In his honor, we conducted this pre-scheduled online interview. This interview includes segments of recordings of Richard’s thoughts and reflections from previous interviews. You may listen to Chief Richard Grass final “live” interview by clicking HERE.

After a lifetime spent Counting Coup on the corruption, greed, lies and broken promises of the ways of the dominating culture, Chief Richard Grass has traveled to the spirit world to oversee this work from a different energy resonance. He lived up to his name, Charging Bear, as he worked continually and never gave up hope in facing off the arrogance and blatantly broken promises of the U.S. Government treaty issues. The seeming hopelessness of treaties not honored by the dominating culture are at the heart of the broken heartedness that has haunted the lives of so many first nations peoples and within the L.D.N. Nation. He recognized that as the world has looked on, for more than a century the broken promises have come more and more to light as the truth continues to surface, and the lack of trust that has ensued has now infected or effected all who live within U.S. borders and beyond.

Chief Richard Grass continually looked for any and all avenues to speak out for truth and justice for his nation against seemingly overwhelming odds. His was a voice with authority, dignity and disarming truth which endeared him to the oppressed and irritated those determined to continue the abuses fueled by the blindness and madness of manifest destiny. Yet in private moments Richard forgave his opponents and oppressors, excusing them by saying continually “they are programmed to the max”! He truly believed if he could just open eyes to the truth that he could awaken hearts to reasonableness and bring sanity and justice back to an insane and totally imbalanced situation. He often used sharp words like a coup stick to bring attention and focus back to the treaty issues to make his point, believing always this inched the L.D.N. Nation closer to his desired goals (stated above).

Soft of material assets not unlike ancient Lakota Chiefs who lived in the poorest ways in order to serve the people, he was devoid of political “favors”, “connections” or material resources. He had intelligence, wit, and a wonderful sense of humor in his arsenal of “weapons” which he wielded unyieldingly against a numerous, greedy, and mighty foe – which he referred to as “the status quo” of a highly dysfunctional dominating society.

And like the traditional Lakota Chiefs of his ancestors he lived below the lowest material standard of his people, took in the homeless, the despondent, the hungry, the abused, those blinded and robbed of all resources as well as the emotionally numbed and addicted who had fallen through all the cracks of the turmoil and abuses of the “status quo” – those who had nowhere else to turn. They came for help, advice, food, assistance, and some came merely to trick and rob him of his time and favors because of the fame of his bloodline, and when he was not looking, they carried off as souvenirs of their visit a wealth of paperwork he had meticulously gathered. Then he would regroup and re-gather papers and make more copies and start all over again in his attempt to resolve the international treaty issues (just as we will who carry on his work). He looked far past skin color into hearts, and befriended many people from all walks of life and from many races and nations.

Since I have known him he spent what little income he earned as an artist just barely keeping his old van in odd states of repair (most of the auto repairs he did himself) and to try to keep some gas money saved back, so that he had some way to travel as far as he could to educate all who he could about the still un-honored treaties. If there was ever any money left over from these daily humble and necessary living expenses it was used to rid his home of the lice, vermin and bedbugs brought in by the stream of street people he opened his home to when they had nowhere else to turn. He was a true Chief in the traditional ways of the Lakota. Moved by his determination and dedication to use what he had to serve his nation, I accepted his request to give his message legs by joining my dream songs (already on these subjects) to his work, and by trying to assist him in reaching his lofty goals for the L.D.N. nation by using my time and humble resources to build these web sites to reach the folks he couldn’t reach by traveling in his van.

After a lifetime spent Counting Coup on the corruption, greed, lies and broken promises of the ways of the dominating culture, Chief Richard Grass has traveled to the spirit world to oversee this work from a different energy resonance. In his honor and to keep his work alive, there is MUCH information he has given me that needs to be put up on his site for he was adamant that the truth be known. Thus with much trust in the spirit of this work, myself, his bloodline descent, and a dear Lakota elder, we continue to work to piece together what remains and hope to continue his work with gentle voices for truth. He lived up to his name, Charging Bear.

Bunny Sings Wolf
All proceeds from the sale of Bunny’s CD “Treaty Lands” which include the Aboriginal Peoples’ Music Choice Nominated song “Prophecy Keeper” song “let the wind blow, let the truth be known for all mankind again” – are used to support this work.