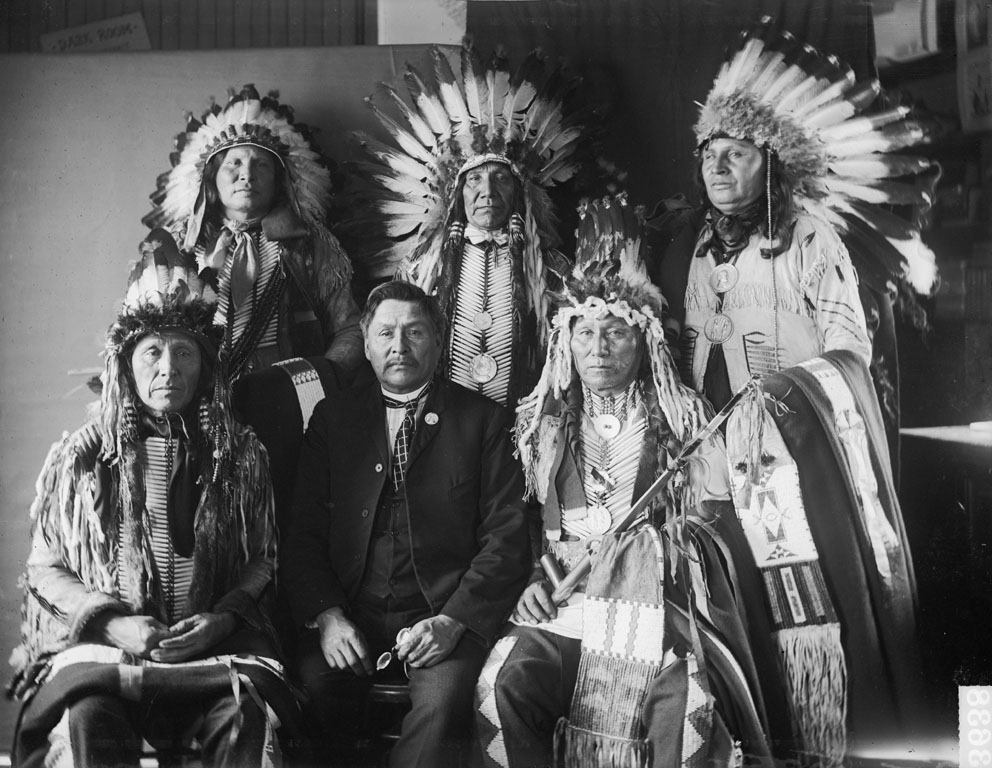 Please accept, Excellency, the assurance of our highest consideration-Richard Grass

Charter of The Cooperative Association of Lakota, Dakota, and Nakota Chiefs
Statement of Principles

This association is formed of the hereditary traditional chiefs who are the natural leaders of the peoples of the Great Lakota, Dakota, and Nakota Nation. The traditional chiefs are responsible for the management of the domestic affairs of their respective tribes and the Grand Chief is responsible for oversight of all such domestic tribal affairs and also is the chief foreign relations agent in representing all of these peoples internationally. This association also subscribes to the Principles of the Indigenous and Tribal peoples Solidarity Union. The association is founded on this premise and that that there exists an undeniable need to restore internationally-recognized human rights and general well-being of these peoples.

Considering that history is replete with the injustice of Genocide and social inequity perpetrated upon these peoples by governments and persons foreign to them; and,

Noting that international law encourages self-help and self-determination and that in the Western Sahara decision: “The ICJ left open for groups, whether composed of states, of tribes or of individuals, the claim to be a legal entity distinct from its members. That claim remains open.” (c.f ICJ Reports 1975:12,63); and,

Noting further that Section 702 of Restatement of the Law Third: Foreign Relations law of the United States, especially the third paragraph of item b of that Section, may also be applicable in respect to the formation and objectives of this association; and,

Finding that the true and natural leadership for these peoples is the hereditary traditional chiefs who now assert their right to be a legal entity distinct from the members of their respective tribes in order to accomplish the general objectives contained in the Statement of Principles of the association; and,

Be It Further Resolved that the association is a representative arm of the traditional governments of the Lakota, Dakota, and Nakota peoples; and,

Be It Further Yet Resolved that in order to accomplish the aforementioned goals and objectives, the association is organized formally pursuant to the following articles:

This association is duly chartered under the sovereign authority of the Grand Chief of the Great Lakota Dakota Nakota Nation exercising the basic right of self-determination.

The legal name of the association shall be: Cooperative Association of Traditional Tribal Chiefs of the Lakota, Dakota, and Nakota Nations

(a) The purposes of association shall be to lawfully deal with common problems from which these peoples and other indigenous peoples suffer by such ways and means, including, but not necessarily limited to, making and implementing policies based upon traditional tribal principles to alleviate social problems and bring about natural social cooperation and natural order among these people, and to create, design, develop, and implement tribal cooperative economic systems and projects to improve the conditions of work, and to create, design, develop, and implement educational systems and programs based on traditional tribal principles for advancement of the cultures of these peoples;

(c) To raise and administer funds for the purposes, goals and objectives stated above and for other not-for-profit purposes.

The association shall be empowered to do anything necessary and proper in furtherance of its principles, purposes, goals and objectives, including — but not necessarily limited to: exercising authority of self-governance and developing policies to guide its internal and external affairs and protect its common interests; conducting research, exploration, and examination of problems which these peoples face or might face; dissemination of research findings and information and statistics pertaining to such problems through any suitable manner or media; analysis of such problems and development of solutions to them; and to hold such property and utilize such resources as respectively necessary and reasonable to further the stated purposes.

Governance of the association shall be autonomous and self-governing as consistent with the principle of local and setf-determination in the formalization of a general council, which shall at any given time, consist of not less then five members and shall normally consist of seven hereditary chiefs, one of who shall be the Grand Chief as a representative of the General Council. The basic function of the general council is to make and administer policy and form tribunals.

(a) The criteria for consideration as associate member in the association is that the prospective member shall be required to understand the principles and general purposes of the association and have a genuine interest in furthering them. This does not preclude the member from being considered active if the member does indeed exercise general liberties of activism guaranteed to all members.

(b) The criteria for consideration and treatment as an active member is that one should first meet the associate member criteria and also should be an indigenous Lakota, Dakota, or Nakota person who holds a position in government of the association.

Dues shall be voluntary and any significant material contribution or unpaid labor might suffice for payment of dues depending on its relative value.

Assessments may be made for R&D project and educational expenses for members and others who have agreed to be assessed for such expenses.

(a) The basic criteria for qualification for administrative positions) for the general council is that the prospective council members) shall have active status and demonstrate true interest in the internal workings of the association.

(b) The criteria for qualification is that the prospective general council member shall possess hereditary chiefly status and have wisdom of experience in traditional indigenous and tribal governmental systems.

(c) The criteria for qualification as Grand Chief of the general council is that the member shall possess the hereditary status of Grand Chief and also demonstrate understanding of conducting external affairs of the association.

(b) The association may organize and form subordinate organizations and semi-autonomous entities such as an association trust or land bank or similar entity to hold title to property and resources upon which association members depend for their sustenance and that are necessary for cooperative operations.

(c) (1) The association general council may select or appoint managers for such chartered subordinate or semi-autonomous cooperatives, and such managers shall not be afforded membership status, but shall be entitled to the general benefits and protections of the association.

Section 4: Allocation and Disbursement of Funds:

(a) Besides as already provided for in the articles of association, funds of the association shall be allocated as expenses, which may include, but not necessarily limited to: funding of cooperative housing, food, healthcare, education, cost of living allowances, communications, transportation, rights protection, and other related necessities. Allocation of funds shall require consensus of the general council and may be subject to referendum, but general disclosure of specific financial data shall be expressly prohibited.

(b) Disbursement of funds shall be made by the Grand Chief of the General Council under its general oversight authority and also may be subject to referendum, but general disclosure of specific financial data shall be expressly prohibited.

(a) The association shall keep confidential written record of its revenues, fund allocations and disbursement thereof by an accounting method that is deemed appropriate by the general council.

(b) The association shall keep record of general and special meetings by any efficient manner.

Meetings shall be conducted in the customary traditional manner of the indigenous persons involved with the association.

General meetings of the general association membership association may occur annually upon adequate notice, provided that there is reasonable cause to hold such meeting in the year it may occur.

Section 7: Referendum on Acts of the General Council:

These policies may be amended by proposal and adoption of amendments by consensus of the general council.

Notwithstanding that the association shall continue to exist in regardless of whether or not it is formalized in writing, the dissolution of the formalized written aspect of the association as an socio-economic arm of the Great Lakota, Dakota, Nakota Nation may occur if proposed and adopted by consensus of the General Council mentioned above. Section 10: Registered Agent:

The association may change its registered agent through any reasonable manner.

These policies have been adopted as duly recorded in the minutes at a duty organized meeting of the first general membership of the association on the 27th day of May, 1999 and signed again by the following Resolution on the 21st day of December, 2008

Whereas; We are The Lakota, Dakota, Nakota Nations and The Traditional National Government, since time immemorial. We are Descendants of The Seven Council Fires, which are The Seven Bands, Sihasapa, Hunkpapa, Miniconjou, Itazipco, Sicangu, Oglala, Oohennunpa and Allies, The Cheyenne Nation and The Arapaho Nation International.

We have come to realize We are not Corporations. In order to have Effective Representation, Domestically and Internationally, such as a Trading Network for our Economic arid Social Structure. We Must look for other Alternatives to have Effect, and to Promote as a Model for All Indigeneous Peoples, similar to a Union and Solidarity Traditional Governments, in that sense, an Interna­tional Association to begin with.

Whereas; We have been without Effective Representation far too long as Nations of Peoples, even for Our Jurisdiction and Plenary Powers.

So Be It Resolved; We, as Hen and Women of the Direct Line of Descendants of The Lakota, Dakota, Nakota Nation, and The Seven Council Fires, as Hereditary Lineage of The National Traditional Government.

Do Hereby Endorse and Support the International Cooperative Association of The Lakota, Dakota, Wakota Nations Traditional Chiefs, Charter, and Statement of Principles, for Our Effective Representation, Our Jurisdiction for Our People, Our Allodial Title to Our Land and Resources, and to start Excercising Our Plenary Powers to these Effects, as Treaty Signers and Non-Treaty Signers.

So Be It Resolved. 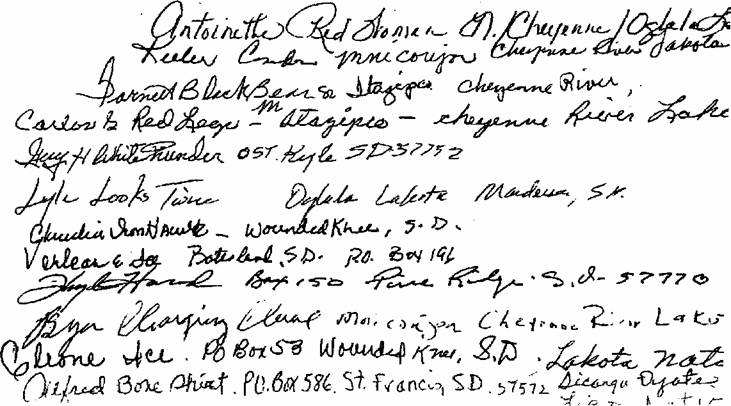