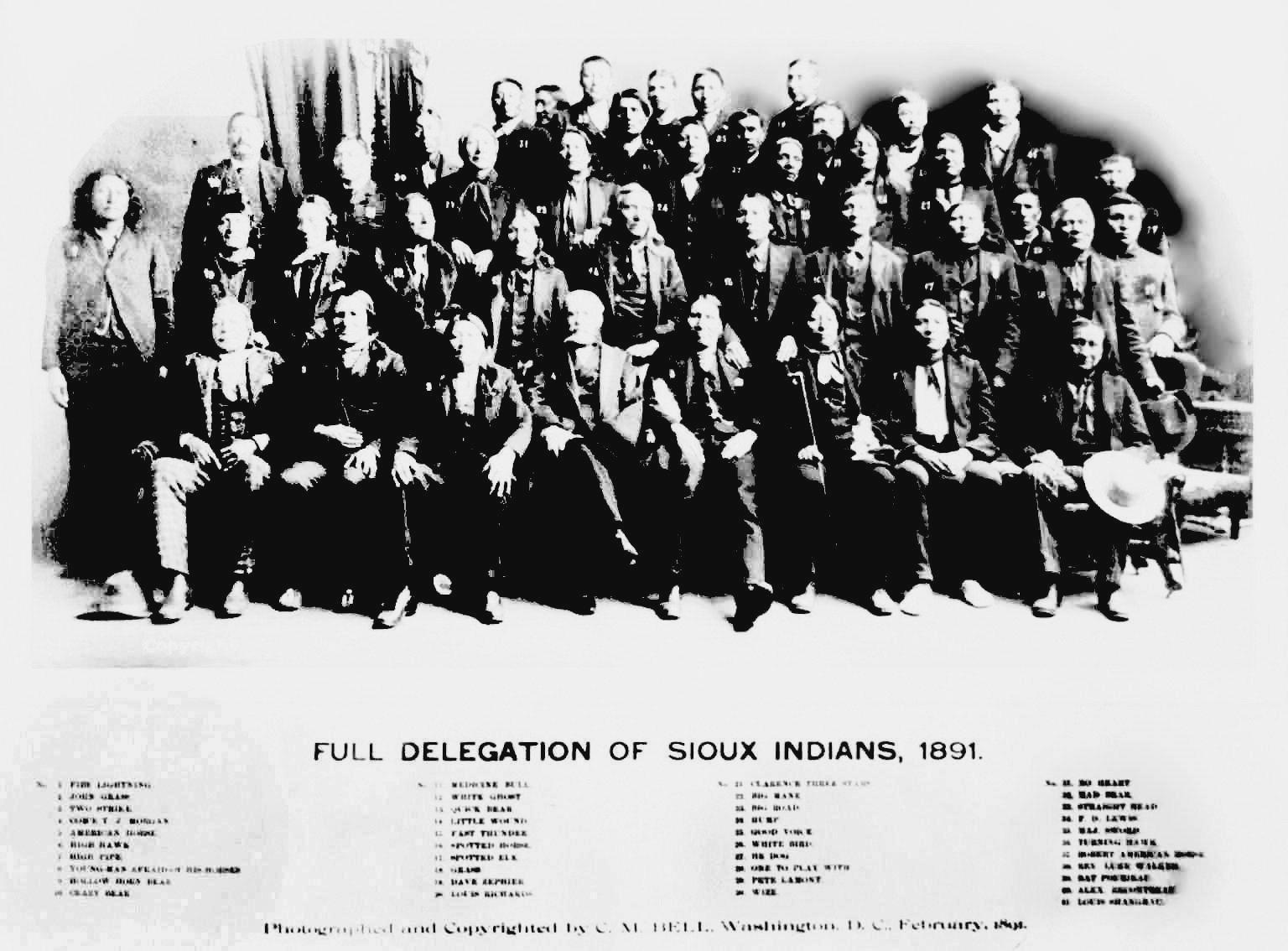 The Reason for the 1891 Delegation
On Dec. 15, 1890, a body of Indian police, acting under orders from General Miles, attempted to arrest Sitting Bull in his camp, about 40 miles northwest of Fort Yates, N. D. A skirmish ensued, and in it the noted chieftain, together with his son Crowfoot and six other Indians, was killed. The remnant of the band made its way to the Bad Lands. On Dec. 28 a battle occurred near Wounded Knee, S. D., between a cavalry regiment and the men of Big Foot’s band. Thirty of the whites were killed, while the Indian dead numbered over 200, including many of their women and children.

Over 3,000 Indians then fled from the agency and encamped near White Clay Creek, where, on the next day, another encounter occurred. The result of this engagement was the dispersal of the Indians with heavy loss, and the death of eight soldiers of the 9th Cavalry. Several other skirmishes occurred during the week which followed, with loss of life on both sides. On Jan. 14, 1891, two councils were held with General Miles, and the chiefs, seeing the hopelessness of their cause, agreed to surrender their arms and return to the agency. The war was practically ended, and on Jan. 21 the greater part of the troops were withdrawn from the neighborhood of the reservation.

On the 29th, a delegation of Sioux chiefs, under charge of Agent Lewis, arrived in Washington for the purpose of conferring with the Secretary of the Interior. The conference began on Feb. 7,1891 and continued four days, at the close of which the Indians were received by President Harrison at the White House. They were assured that the cutting down of the congressional appropriation was an accident, and that the government desired faithfully to carry out every agreement made. On their return home the chiefs stopped for a short time at Carlisle Indian School in Carlisle, Pa., where the children of several of them were attending school. In 1899 the total number of Sioux was 27,215, divided into nineteen bands, and located principally in South Dakota.

This website has been created as a gathering place for the documentation of the general philosophies, ideals, and the ongoing organization and work by spiritual traditional Chiefs and the few remaining traditional spiritual Elders of a free spirited people re-established and re-awakened as a sovereign nation international at Bear Butte on July 14, 1991. We hope you will read through and think deeply about all that is offered here as we move back toward a unified and respectful way, a sacred way, in learning to live again in the wise ways of our ancestors.

Since more and more of our natural freedoms to care for the lands, peoples, and resources our ancestors bestowed upon us in good relationship have been assimilated, polluted, pillaged, made political, or covered over in concrete, garbage and red tape, corrupted within the methodical, mindless and heartless structure and oftentimes genocidal and dangerous attempts of the dominating culture to “control” us and the many natural nations (plant and “animal” lilfe) still surviving within the borders of the lands of the treaties our forefathers signed in good faith, we recognize that in the name of “progress” by the deliberate design and intent of the dominating culture, it has proved very difficult for our people, our relatives, to keep healthy and in balance until now.

But as the buffalo faces into the storm, we still live today.

Our traditions, the ways of our ancestors, our languages, our TRUE history and spiritual and cultural heritage (much of which is still untold) remains and stands strong now only as each individual associated with us is lifted up, honored, and effectively taught of what power remains in our nation so that we may continue with responsible thought and appropriate action.

Our prayer continues that we may awaken awareness – that the truth will be known – so that together we may join hands to re-discover workable effective ways to create a viable, safe and nurturing environment to grow each individual within our nation and beyond, encourage and educate each to take full responsibility in respectfully express their own unique and sacred life way within the circle, and to thus honor the whole and gather the sacred tools and resources still available to us to mend, heal, and thrive.

This web site is a long held dream that now awakens for this purpose so that we may now join our hands and hearts towards a better and more whole expression of our sacred circle now, and for future generations.

Note: “white” history states there was division among the Chiefs and holy men, calling them enemies (which is incorrect according to our traditional spiritual history which has yet to be published and distributed). LAKOTA means “allies” friends – to behave in a respectful, friendly manner with all our relations.

Also there are many today having meetings who are claiming to be “Oceti Sakowin” – yet they are and remain divided within themselves and with each other. Any who speak and act disrespectfully, which is not the traditional spiritual way represented by this web site, betray the traditional spiritual ways of Oceti Sakowin – the seven council fires who once flourished and led our nation successfully. Throughout this web site we also quote “recorded history” sources as reference, but hope the discerning heart of our oyate will find and understand our traditional spiritual ways differ greatly from what has been recorded about us. It is time for the truth to be known, so that our young ones may understand and begin to walk in harmony again.

Working together we re-visit our traditional and spiritual ways with deep appreciation and respect, while we move towards better exploring peaceful healing ways to exercise our freedoms as a life honoring people/nation to walk in beauty in balance, harmony, abundance and peace so that the people may live!