Susie Grass: leading a colorful life for eight decades By Avis Little Eagle – January 28, 1992 Lakota Times Special RAPID CITY – From winning beauty contests in the 1920s to acting in “Dances With Wolves,” Susie Romero Grass has lived a colorful life. She was born at what is now known as Wakpamni district August 22, 1907, to Katy White Bird and Philip Romero. Seraphina, “please call me Susie” Grass and her sister-in-law, Julia Emma Grass (nee Spider), received special tributes at a dinner in Pine Ridge December 14. Mrs. Grass later reminisced about her part in the filming of the movie, “stagecoach,” with John Wayne, working with Kevin Costner in “dances With Wolves” and beading a vest and moccasins for film great Clark Gable. She graduated from holy rosary mission in 1920. At the time 500 girls and boys lived there year around. “It was like home,” Mrs. Grass said. Her mother and father came and camped near the school on holidays, and she attended two years of summer school there. After graduation, she attended St. Agnes Academy in Alliance, Neb. She married commercial artist Joseph Gordon Grass in 1923. 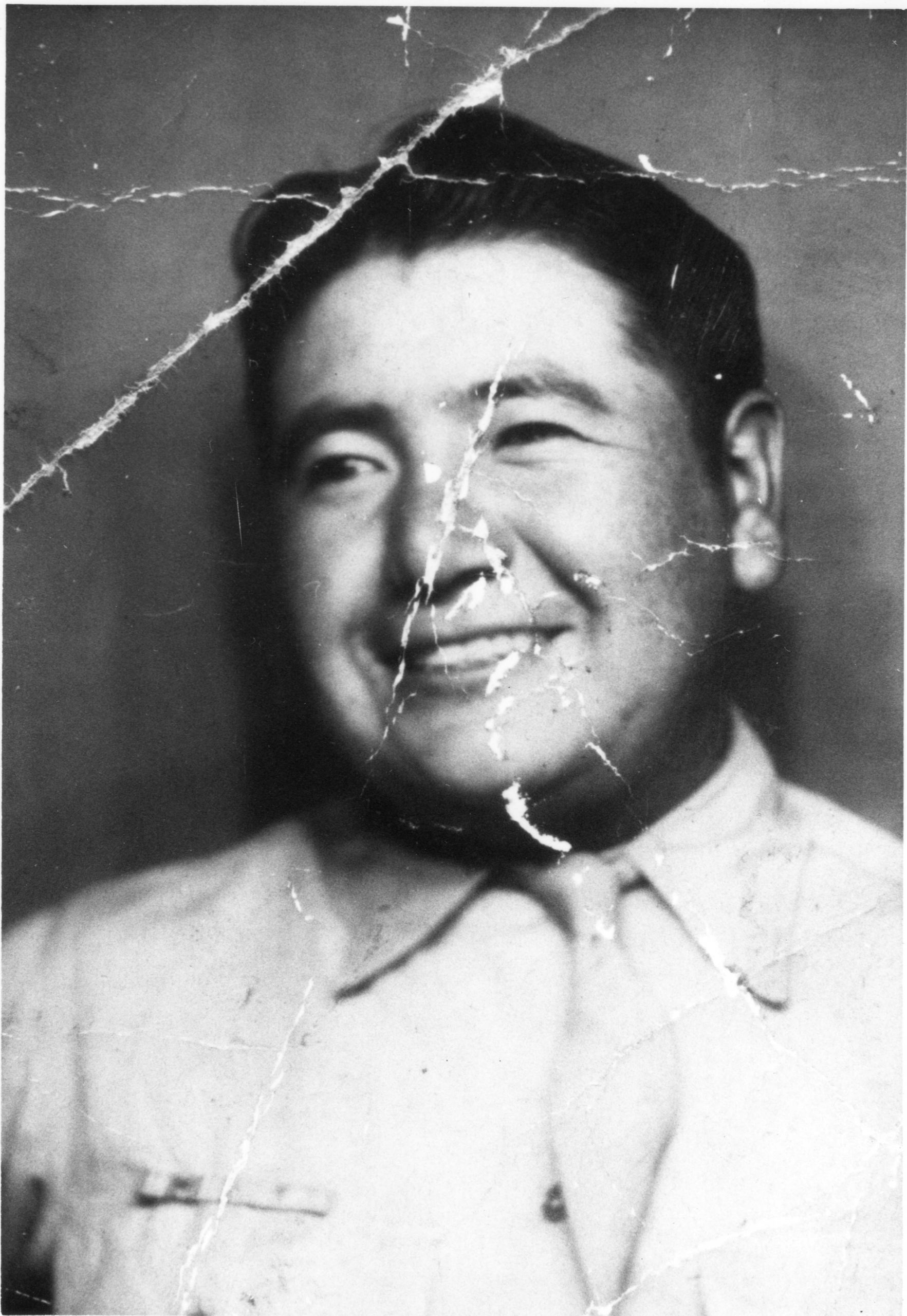 Joseph Gordon Grass
Their children can trace their lineage to Chief John Grass, a Blackfeet Sioux, who distinguished himself as a warrior early in life and later served as a judge of the court of Indian offenses on the Standing rock Sioux Reservation, and Chief two Strikes of the Sigangu Band of Teton Sioux. Her father, Philip Romero, served a both a lawyer and later a judge on the pine ridge Indian Reservation. Their family included four girls and three boys, all of whom attended the Holy Rosary Indian School. Susie says the early experiences there taught her how to run a home, make meals stretch and budge her money. She still crochets and sews clothes, two tasks she learned at Holy Rosary. Her father was community oriented and made sure his children were active in church festivities, dancing contests, races and other events and activities on the reservation. In the 1920s, Susie won a hot springs Water Carnival beauty contest. She wore a beaded buckskin dress. Soon after her marriage in 1923, Susie and her husband settled down in Porcupine, by Sharp’s Corner. She recalled those were times when one could “drink the weater and it was clean,” and people still used kerosene lamps and candles and cooked on wood stoves. “Indian women smoked Bull Durham and old men smoked kinnicknick, or leaf tobacco from the mountains.” She said people socialized at get-togethers, meetings, church gatherings or five-aways and pow wows, “mostly in good weather – the spring or summer.” She said one issue often discussed when she was growing up is still discussed today – the Sioux Claim to the Black Hills. “My grandparents talked and talked about the return. Every day, and every night all the people would get together and talk about it. I remember my dad would say, “Poor Indians will never get anything out of the Black hills.” And that is where the issue sits today, she added. She remembers in the 1920s and 1930s when tuberculosis ravaged the Lakota people. “Everybody was dying of TB. Washabaugh and Shannon counties were serviced by field nurses. “They would check every family. Most had nothing to eat, there were no refrigerrators, electricity or water.” This was when the Sioux Sanitorium was established at the Indian school site in Rapid city, and loved ones from many families traveled there for treatment and died there from consumption. During the Depression people worked on farms and ranches for food. “We would clean chicken coops or barns. The men would fix fences. We would work for eggs, chickens, a pig or a cow,” Susie recalled. Some people worked on potato farms and god paid with potatoes when the job was done. Susie said the area was such a dustbowl during the Depression that there were hardly any wild turnips and if there were, the flower would go so fast they couldn’t be found. Sandstorms covered everything with dust. “It was really dry and dusty. You could get a bucket of water and half of that was dirt. You would have a good quart of water left in it,” she said. Susie was a midwif in the years when giving birth at home was the norm for Indian women. She delivered own of her own children, most of her grandchildren and her sisters’ children. She has 12 grandchildren, 15 great grandchildren and one great-great grandchild. Her husband worked in a Civilian Conservation Corps (a Depression-era work program under Franklin Roosevelt’s administration) building the Oglala dam. He made $29 every two weeks, which she said was a lot of money at that time. When World War II broke out, her husband didn’t qualify for induction, so they moved their family to Casper, Wyoming. Her husband, who was a natural artist, was observed painting a design o a car and was hired on the spot. This launched his career as a commercial artist and his family of five was raised on the proceeds of sign paintings, some of which still stand in the states of Wyoming, South Dakota and Nebraska. She remembers when the Indian community of Rapid City lived in a tent camp beside Rapid Creek, by the packing plant on Oshkosh Street in the 1950s. After moving to Casper, her husband’s first job was painting numbers and names on the sides of 150 motor boats. During this time Susie worked cleaning motel rooms. During his career he painted murals on walls, parade floats, billboards and businesses. In 1967 he went to California and painted campaign pictures for Robert GF. Kennedy. Her husband’s last job was a painting he did in Lingle, Wyoming. Back then, she said, the landscape was scenic, there was not as much commercial clutter as there is now. People traveled gravel roads because there were no paved highways. There were fewer gas stations and liquor stores and people. Although the 1990s bring a fast paced lifestyle, Susie keeps busy doing beadwork, crocheting and traveling to get-togethers. She was an extra in the award winning film, “Dances with Wolves.” Her bit part, that wasn’t in the released film, showed her giving Kevin Costner some dried meat before he set off on the buffalo hunt. She said Kevin called her Susie and took a liking to her because she had natural gray hair and wrinkles that were made with time, not face make-up. She hopes that the four hour version will show scenes of her grandchild whose speaking parts were cut out from the three-hour version. From school girl to beauty contest winner to actress, Seraphina Susie Grass has led a colorful life that has spanned eight decades, and she plans to be around for a few more colorful years. 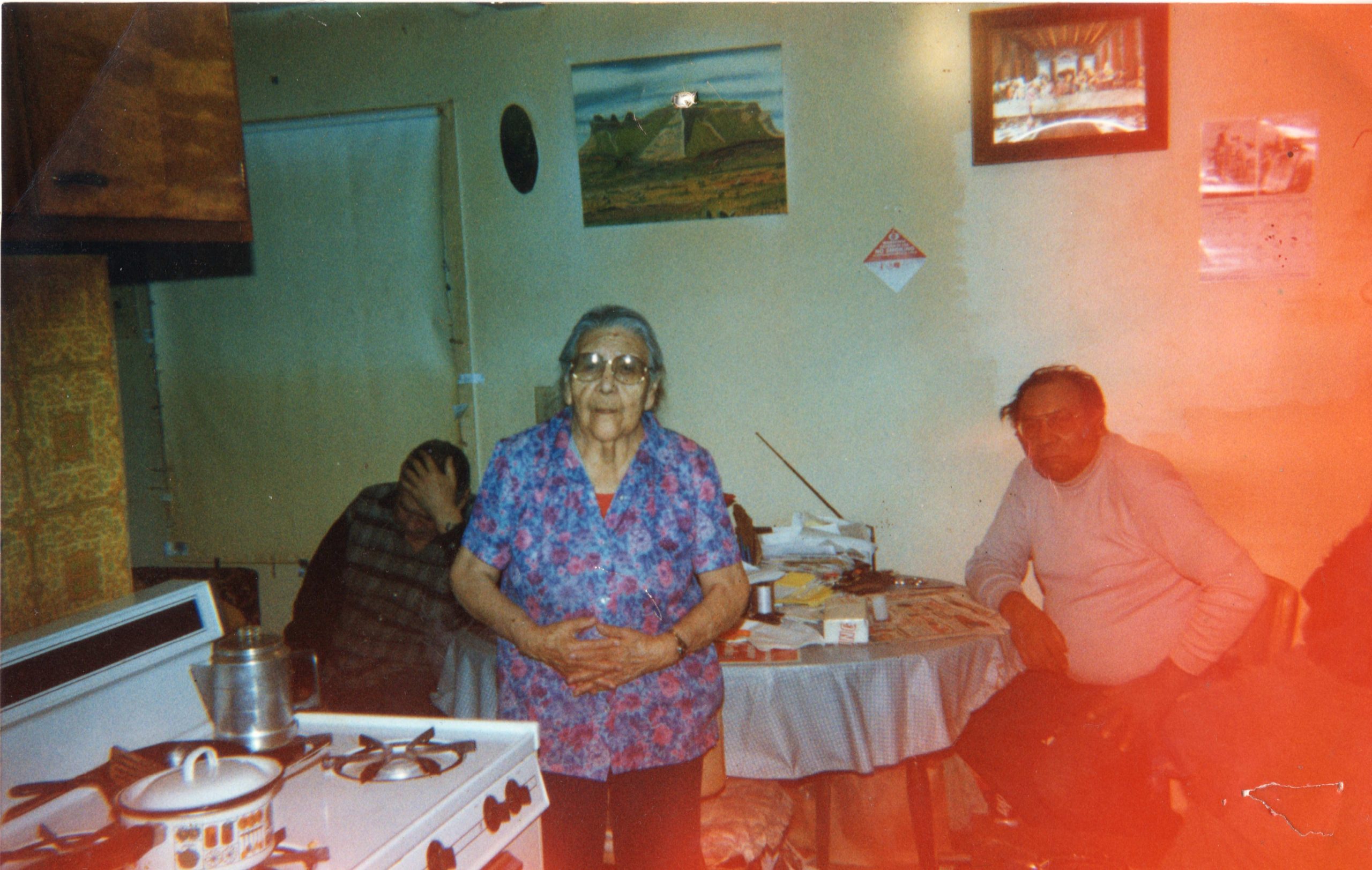 Susie Grass in her kitchen at Lakota Homes, Gnugnusaka Drive in 1990s (Son,Richard Grass seated at table at right)
Click here to listen to a 4-28-10 online interview with Chief Richard Deo Grass, (son of Susie Grass) descendant to Chief John Grass (Mato Watapke – Charging Bear – Oglala, Lakota, Sihasapa) wherein he explains how he was eventually located by the Elders and informed of his lineage and duties to re-establish this nation.